Hand crafted from start to finish in Somerset, UK.

Graham Vincent Violins are entirely hand made by me (Graham Vincent) in the village of Norton Sub Hamdon in Somerset, UK. The violins are not copies of any individual violin or maker. I make violins to my own pattern and I'm impressed and influenced by some of the splendid and rather individual C18th English makers - who were, in turn, most influenced by Amati.

I like individuality and variation in my work and the best example of this is that I never use templates for arching, everything is done by eye which means that your violin will have minor differences from any other violin out there!

The violins are individually made using traditional methods and techniques.

I don't put any violins for sale on this site unless I'm 100% happy with them, but please email me with specific questions and also if you'd like to arrange a visit to try out a violin.

" The violin looks lovely and the sound is just what I like to hear......... has some fantastic voicing, you’ve made a lovely thing here! Now I have to think of a name... x"

"...that the octave violin has arrived safely, and that I have been enjoying playing it over the last couple of days including at a gig yesterday...... it compares really well with the acoustic which I already owned and was made by a luthier who had built a reputation with octaves...........  The sound projection and resonance of the instrument can’t be faulted........... Looking forward to many happy hours playing the octave, and if I ever feel the need to purchase another instrument........ then I will be in contact."

"Stunning instrument, beautifully crafted and a joy to play. It’s mellow and balanced throughout the range but with good projection. I don’t like an instrument that’s too piercing/bright at the top of the range - there’s much better balance throughout. It responds well to being played both loudly and with expression. In third positions there’s no discernible difference in the tonal depth and harmonics play true."

"These two violins are just perfect." 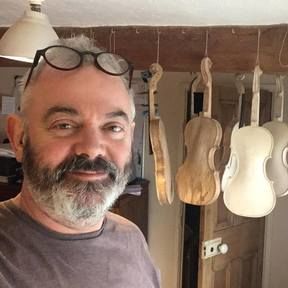 After completing my 'A' Levels I studied guitar making at the London College of Furniture (subsequently renamed Guildhall University). I returned to the South West of England full of the ambition to spend my life making musical instruments.

I soon realised that with my limited resources this was not going to be the road to riches - or even to a decent wage! I subsequently spent time designing and making furniture and was later employed by a local company to set up their drawing office. By the time I left a few years later, I was the design and production manager, had a load of people working for me and had all of the associated problems and headaches. This was a far cry from guitar making and I didn't enjoy this period of my career at all.

In 1999 I started to play the fiddle and this has blossomed, I play rather a lot of music (http://mitchellandvincent.com) and have played festivals such as Glastonbury, many folk festivals and at folk clubs across the UK.

I was making and repairing violins in my spare time and I realised that the love of making instruments was still present. I’ve been doing less and less architectural work to the extent that violins are now my main focus. I couldn’t be happier!

I’m a staunch environmentalist and have recently stopped using any tropical hardwood (other than reclaimed) in my instruments. I don’t make to commission, but build the instruments I like and then offer them for sale. The instruments are entirely traditional in construction - even to the extent that I cook my own varnish.

At present the only place to try one of my violins is at the workshop in Somerset. Visits by appointment only as I'll be in the workshop! Please get in touch: grahamvincentviolins@gmail.com